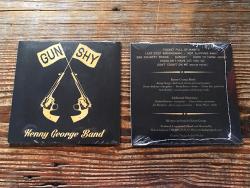 Gunshy, the debut EP from Aiken’s Kenny George Band, is coated in a thick layer of Nashville spit-shine, but it feels miles removed from the Music City machine — a credit to the group’s warm and welcoming execution.
The outfit specializes in a brand of country music that has gone the way of the dwindling caribou in recent years. The focus here is on sincere, well-crafted songwriting rather than chasing some bulls#!t idea of what it takes to become a macho country badass. Bereft of such posturing, Gunshy is dominated by lovesick laments, but like Merle Haggard said, there ain’t no shame in a mixed-up mess of a heart.